Messer & Dussack: learn more about the weapons and their use

Messer or Dussack, from a fencer's perspective.

Messer or Dussack, from a fencer's perspective:

Over the years, much (virtual) ink has been used to convince the HEMA community that the dussack is in fact its own type of steel weapon that deserves more love than it currently gets. Thankfully, ever fewer people seem to think that the dussack only refers to wooden or leather practice versions of the Messer (or heavens forbid, of the sabre). Rather than focus on the typological differences between the Messer and the dussack, this series of short articles will have a look at what fencing masters of the day thought of the distinction between the two weapons.

For this first instalment though, it might be useful to quickly recap what the two different types of weapons look like. Messers are notoriously hard to pin down. Quite often, we can identify a long knife instinctively, but putting a finger on the defining characteristics is nigh impossible. In general, Messers tend to have a combination of the following characteristics: a single-edged blade, a Nagel (nail), a scale tang and a riveted grip. All the standard Messer types of Landsknecht Emporium have all these features, but it is important to remember that there are also plenty of originals that have a slightly different construction.

A dussack is then often defined as the 16th century evolution of the Messer, sporting a complex hilt as its most defining feature. The grips also tend to be constructed differently, and many originals seem to have a thumb ring as well, like the Dorothea dussack. 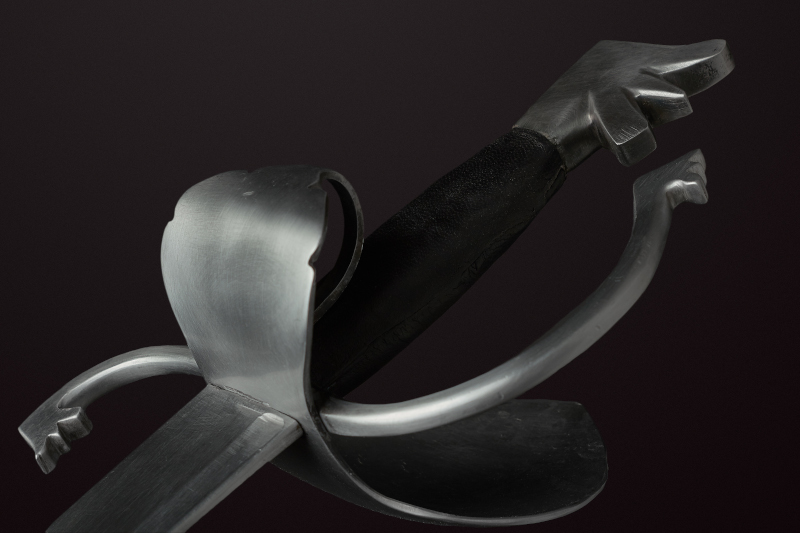 There are many possible explanations for this change. A lot of the scholarly work on steel dussacks is based on originals in Norwegian museums, as the weapon appears to have been exceedingly popular among its peasantry during the late 16th century. However, the word ‘dussack’, or ‘tessack’ shows up in Austrian and Southern German sources way before this time, and the aforementioned Norwegian examples seem to have mostly been bought in Germany. Many scholars have suggested that the change from Messer to dussack first took place in Middle Europe, as a consequence of the experiences of the contemporary Ottoman Wars. The Czech origin of the word might lend some credence to this theory. Another argument for this connection seems to be that in later sources, dussacks are sometimes shown in the hands of Turkish fencers. In this example however, we see that the weapons described as ‘tashack’ look more like Messers! 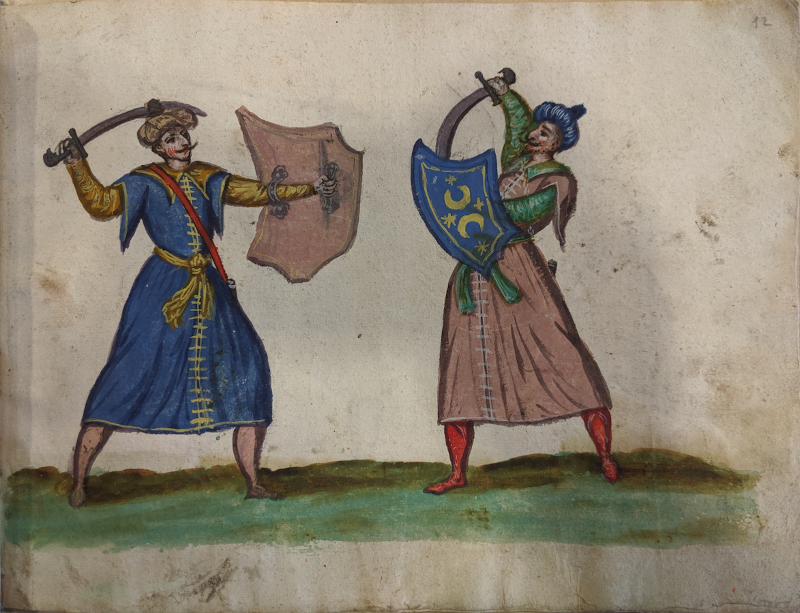 This begs the question: was the difference between our two related weapons truly as pronounced in the minds of fencing masters of the time? We’ll be exploring this question in the next instalments of this series.

Last time we spoke of the dussack, we had a look at the origins of the name and at the extant originals that can be found in collections in Europe. This time, we pick up the thread where we left it and we move on to the fencing treatises that mention the use of the dussack.

The first well known fencing master to mention the dussack is Andre Paurenfeyndt. In his 1516 chapter on fencing with the M esser, he mentions that it is a very foundational gateway to other on-handed weapons, among which the 'Tessack' takes pride of place. Moreover, while the text consistently refers to M essers, the illustrations seem to show the wooden practice weapons that are often known as dussacks to modern practitioners! Paurenfeyndt was an Austrian freyfechter, but because of the prolific nature of the reprints of his book, the illustrations and text spread through Southern Germany, and as far as the Low Countries.

From the first hal f of the 16 th century, we also have the anonymous Fechtbuchlein , which mentions the dussack. This particular treat is not well known and scarcely interpreted, but it seems to have many things in common with the type of fencing we see in Paurenfeyndt's Ergrundung Ritterlicher Kunst der Fechterey. This is interesting, since the Fechtbuchlein speaks about the 'tisseck', while Paurenfeyndt calls the weapon primarily ' M esser'. In both cases, there seem to be both plays that are suited to play-fencing and more serious techniques, that seem to have at least some connection to Lecküchner’s system of M esser fencing. Especially Paurenfeyndt has a wide variety of dirty street-fighting tricks to complement his more good-natured plays.

To prove the point that Paurenfeyndt's plays work with both M esser and dussack, let's have a look at this interpretation of one of his plays. In the play which we can see here, the opening move is made by the fencer on the left, thrusting with a step. If the thrust is set aside, the attacker strikes to another opening, until they manage to hit. Although dussacks and messers tend to have pronounced differences in handling, this plays works well with both weapons.

In conclusion, we can say that when dussacks start to appear in fencing treatments, they are functionally not different from M essers. Whatever term a fight book uses, the plays tend to work both for fun or in earnest and generally work with now other one-handed weapons as well. In the course of the 16 th century, fencing will change significantly, and so will the role of the dussack in fight books. This will have to wait for the next instalment in this series though.

In the previous article, we saw that the first mentions of the dussack in fencing treatises were generally neither specifically aimed at playful fencing in the Fechtschule, nor were they just meant for dussack. André Paurenfeindt’s second chapter is more an exposé of all types of one-handed weapons for instance. There seems to be little difference between fencing with Messers or fencing with dussacks at this time. The question that still hangs unanswered though, is whether we should look at later treatises in a similar way. To that end, let us look a bit closer at Joachim Meyer and Lienhart Sollinger.

It is scarcely necessary to introduce Joachim Meyer. His sections on dussack have often been presented as proof of the sportification of one-handed weapons, since the plates show wooden practice weapons after all. It is quite interesting to note though, that Meyer speaks of the Dussack as a weapon that will teach skills relating to all one-handed weapons in the Lund version (1560’s) and as a tool from which to graduate towards rapier in the Gründliche Beschreibung (1570). In Meyer’s mind, there must have been a similar connection between one-handed weapons, as the one that existed for Paurenfeindt. It would be easy to just assume that the term Messer simply fell out of favour, and it was simply replaced with dussack. This doesn’t seem to be fully the case though. Lienhart Sollinger, the relatively unknown, but extremely well connected fencing master from Augsburg, was practising and teaching roughly at the same time as Meyer. He is mostly know for compiling a fechtbuch that includes material from Jörg Wilhalm Hutter. This book however, also has a short Messer treatise written by Lienhart himself. Although he gives very little information on why one would want to learn about the Messer, his lessons are very interesting. This is not least the case because he refers to the weapon as a Messer and not as a dussack. So has Messer moved with the times? Certainly it seems so. Most of the plays from this Messer manuscript, would also work really well with a dussack, in earnest and in play. Some of his plays are similar to Meyer’s dussack, but maybe more importantly, they show similar didactics and ways of moving. The play that we show here with both messer and dussack additionally shows up in The other part of the Newen Kůnstreichen Fechtbůches.

Sollinger’s manuscript truly was the swan-song of the Messer. Later treatises seem to have consistently and exclusively called their one-handed cutting weapons dussacks. There is a major conclusion to draw from this comparison though: during the 16th century, fencing masters writing about one-handed weapons did not really functionally differentiate between dussacks and Messers and the two weapons would coexist in fencing schools across German-speaking lands. The weapons themselves evolved, the fencing styles changed accordingly. But there certainly was no clean break between the age of the Messer and the time of the dussack. The moral of this story: we should beware of imposing rigid categorisations on the past. They rarely existed in the minds of people at the time and even when they did, there were always plenty of exceptions.